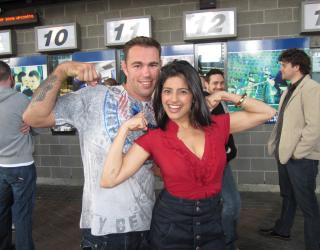 Mixed Martial Art is all about creative techniques to submit an opponent by punching, kicking, knocking out, or to simply blackout opponents...and the ladies want in on this action.

I’m sure when Dana White, the President of the UFC and arguably the most important figure in the sport, first started MMA he would have never guessed that females want to be inside the octagon, rather than on the outside. According to various reports Dana White is certain that he will not allow female fighters into the UFC.

My interest in wrestling all started with the classic WWF; when Macho Man held up Elizabeth on his shoulder, or when the Ultimate Warrior fought Hulk Hogan in Wrestlemania 6, aw the sweet memories of the 90's.

In today's world, women are active in some form of wresting. According to Canada.com 40% of the MMA spectators are females. Why such a high number? Is it the pretty boys? The rugged male fighters? The muscular bodies? or George St Pierre alone? Some spectators have commented that ‘women are casual observers.’ Another suggested that women are using UFC to pick up men…? Now that’s an odd, yet interesting observation.

At the end of the day a huge part of that 40% is composed of serious female athletes, or dedicated fans of the sport itself. "The ones who don't have brains tend to ruin everyone else's perception (of female fans)," says Maden, a writer for the website Gal's Guide to MMA. "But there are plenty of girls I know who are interested in all aspects of the sport and don't go to a fight just to get on camera, or to a see a guy with his shirt off getting all sweaty in the cage."

I'm sure you will never see me in an octagon ring, but for those females who desire to break into this male dominated sport, go girl! I’m glad to see women continuing to break traditional molds and make equality a reality.

To check out some pictures from UFC 131 and my encounter with one of UFC’s top fighter Jake Shields head to: http://www.facebook.com/MeenaMannPage

END_OF_DOCUMENT_TOKEN_TO_BE_REPLACED

BC Lions to Hollywood