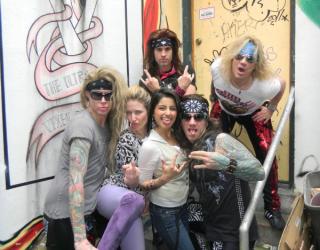 Who said heavy metal is dead? Thanks to the use of hair-spray, leather jackets and zebra spandex, the heavy metal band, Steel Panther has been rocking heavy metal since 1981. Steel Panther is a glam metal band from Los Angeles, known for their profane and humorous lyrics, so yes, interviewing them was a unique experience.

In 2003 Steel Panther published Hole Patrol, their self-produced debut. The band also made some television appearances; Discover Card advertisement, and The Drew Carey Show. For the past few years the rocker band has been touring across North America, and recently one of their stops was in Vancouver, or as they like to call it “Vancougar.”

Steel Panther, the heavy metal rock band, always find themselves rocking with some of the biggest names in Hollywood including, Kelly Clarkson, Billy Ray Cyrus, and even our Canadian pop-star Avril Lavigne. But I was most surprised to see the sexy cameo appearance made by Sarah Silverman in their music video, and latest single, ‘Death to All Metal.’

In May 2008, the band signed a contract with Republic Records (owned by record label Universal Records). Some of their latest hits include: Fat Girl, Asian Hooker, Community Property and Eatin’ Ain’t Cheatin. . . clearly, this music isn’t recommended for a younger audience.

My sit down interview with the band’s lead singer and drummer, Michael Starr and Stixx Zadinia will always been remembered with fondness.

You have to check out some of their music, it will make you laugh hysterically: http://itunes.apple.com/us/artist/steel-panther/id302709189

For behind the scene pictures please click here: http://www.facebook.com/#!/MeenaMannPage

END_OF_DOCUMENT_TOKEN_TO_BE_REPLACED

BC Lions to Hollywood